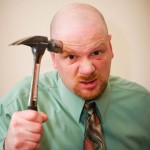 I shot up from my chair so fast it skittered backwards headed for the wall of the conference room. I didn’t really notice though, I was so worked up at this point, I would probably have ignored a 7.0 earthquake. The blame game going around the table had gone on long enough and I was damn well going to put a stop to it here and now. I pointed at the projector screen and was getting ready to lay into the program team with a vengeance.

It took a minute of pandemonium before someone got the lights turned on and attention turned to trying to get the projector back on.

“Did you check the bulb, maybe the bulb burned out.”

“Did your computer get unplugged? I do that all the time.”

“Are we having a power outage? No, right, we wouldn’t have lights.”

The “help” from the rest of the program team was not doing anything of the kind. Finally I decided it was better to just call the meeting. No one was focused on the meeting anymore and without the projector we couldn’t work through the issues we were looking at.

As everyone filed out of the room, someone brushed the light switch plunging the room back into a gloom broken only be the light coming from the hallway. Apparently my laptop was now suffering the same malaise the projector was and its screen was black. Leaning on the table, I gave a long weary sigh. First the program drives off a cliff, quickly followed by most of the program team and now I’m being plagued by faulty equipment. What was causing all of this?

From deeper in the gloom of the conference room I heard a deep voice. It spoke quietly and I could just make out the words “circles” and “oneself.” I hung my head a little lower, great, just what I needed.

I stepped over to the doorway and flipped on the lights. “What do you want Hogarth? Can’t you tell I’m just a little busy right now to be dealing with a figment of my imagination. Unless you can solve my problems I’m not interested. You can’t tell me what cause the projector failure is, can you?”

My gorilla was lounging in one of the chairs nearer to the projector screen. His size umpteen big feet were propped up on the table and he gave me one of his casual Hogarth signature shrugs. “Oh, I don’t know. Have you ever thought it might be you?”

Looking at him as if he’d just grown a second head I said, “What on earth makes you think I’m the cause of the problem?!”

Hogarth pointed me at my chair, still pushed up against the wall where it had stopped after my abortive tirade. Down at the base of my chair, wrapped around one leg, was indeed the source of all the problems.

The power cord for the entire conference-room table. My chair had caught the cord and pulled it from the wall when I stood up.

One Hundred Conversations With The Gorilla In Room

In November 2009 I had my first conversation with the “Gorilla In The Room” and began my ongoing journey to become a better program manager, leader and person. Ninety-eight conversations later I find myself looking back at my journey and asking myself what I can learn from all my conversations with Hogarth. What can I learn from how I managed my career differently, from how I helped others, from how I interacted with others, from the conferences I’ve spoken at and the people I’ve coached.

In June of 2011 I asked similar questions in “Wake Up and Smell The Gorilla.” Only at that time I was still focused my personal “branding.” I was trying to create solutions. “Wake Up” was my vehicle to talk about my five point value system, when I probably had no business in trying to change anyone else yet. Reading the blog again today I even see that Hogarth had already giving me the answer. I was just so absorbed in helping others, I was missing the real key.

“When searching for the source of a problem, start looking in ever widening concentric circles about oneself.”

Regular readers met Peet, my horse, back in “The Gorilla Robot.” Last year I also took up the sport of archery, an excellent sport for mental calm and mental concentration. While both my hobby of horse-back riding and my sport of archery were taken up for their enjoyment and for the positive impact they had on my stress levels, I have since learned an equally valuable lesson from these two past times.

What does this have to do with Mark Horstman’s quote?

Whatever the problem you are facing, no matter who is involved, or what the mitigating factors are, you can almost be certain that some of that problem is because of you. An example…

Before I met my wife, I had the normal red-blooded American-male aspiration to own a motorcycle.  My wife had owned a motorcycle and was a really good rider. Not long after we met she told me I had no business riding a motorcycle, I just didn’t have the right mindset for it. Naturally I didn’t believe her for an instant. I would take the CHP Easy Rider safety course and I’d be a great motorcycle rider, there was nothing wrong with me. Clearly she was wrong. The only thing stopping me was time and money, motorcycles are expensive.

I’d owned my horse for about three months when I took my first solo ride. I came back from that ride and told my wife, “You’re right. I have no business riding a horse. If I can steer an intelligent animal into a tree, just think what I could do with a motorcycle?”

I was so bound an determined to own a motorcycle (I wanted one of those nice BMW touring bikes) that I refused to even consider if I was right for riding. I ignored that I might be the source of the problem. Taking up archery was an even greater example. There is so much that the archer can do wrong, that the few times it really is your equipment are so rare it just pays to assume it was you.

And even if this is the 1% of the time that you are not at all a factor in the problem, if you tackle the problem like you might be part of it, then you’re going to get a hell of a lot farther than if you are always looking for the source outside of you.

Assume you are the problem, be happy when you are not. If you focus on constantly making yourself better, then you will make the world around you better.