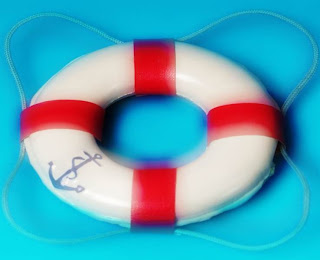 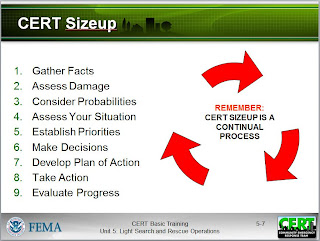 Looks familiar, doesn’t it? The process a CERT member goes through, to assess and deal with an emergency situation, is a lot like what we project managers go through when dealing with a project. I’ve seen lighter weight process frameworks than the CERT checklist. When you start learning about the Incident Command System, a national standard framework for how multi-agency and jurisdiction response to a disaster is handled, then you really see how our training, as project leaders, can be an asset to our community.
I’m currently taking CERT from my local city. This free training is offered by many communities to create a core of citizen volunteers that can help out in the event of disasters or major emergencies. When fire and medical is overwhelmed, CERT teams are become the “First Responders” and can often make a difference between life and death. Most of my fellow class mates are taking the class as a response to the “Glenview incident”, what most of the world calls the San Bruno Gas Pipeline explosion. I, on the hand, am continuing a long tradition of community service.
I first learned CPR and First Aid in college as part of the Resident Assistant program for my dorm. I eventually ended up as the ERT Captain for one of my former companies, over seeing a team for a 1500 person campus. In the course of that time I’ve contributed to saving at least two lives and preventing several more people from having more serious injuries had I not been a first responder while the fully trained medical people were still in transit.
I’m no hero. I believe in helping others and I’ve learned that the skills I use to manage troubled projects are just as effective in managing the response to a disaster or medical emergency.
Good project management can change the world. Even if it is just one band aid at a time.
Joel Bancroft-Connors
The Gorilla Talker
Want me to talk to your gorilla? Send me an email, jbancroftconnors@gmail.com
You can follow me on twitter, @JBC_PMP
Who is Hogarth? Read Blog 001 to find out all about my personal gorilla.