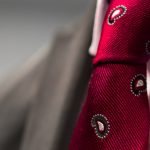 I looked in the mirror and was greeted with a satisfied smile. I looked good, today. My salmon shirt was nicely set off by the patterned eggplant and chambray tie paired with it. With the advent of summer, I was going with a pair of light charcoal slacks and the fresh shine on my Clark’s caught the lights above the mirror.

I’d certainly come a long way from my early twenties. There had been a time when I was let go from a temp office job because I kept showing up to work in the same handful of shirts, which were always wrinkled (I was young, an iron was a luxury then). Not that I really could take credit for my polished fashion sense. The only real credit I could take was having the good sense to marry my best friend and trust in her. I still remember the first time she handed me a salmon colored shirt.

“It’s PINK! I’m not wearing pink, that’s so Miami Vice.” Her reply was “It’s salmon, it goes with your eyes.” She’s always known me well, I’m vain about my eyes and so I capitulated and wore the “pink” shirt. I came home that day and told her that I’d gotten at least a half dozen compliments on the shirt, from men and women. That was pretty much that last time I seriously argued with her on fashion.

“You’re not going to wear that, are you?”, rumbled an all too familiar voice.

I rolled my eyes. Was I not even safe in my hotel room?  I shot a dagger-filled glance at the 800-pound gorilla now lounging on the sofa, “The sign on the door says ‘Do not disturb’, Hogarth.”

He waved the branch of a plant I recognized from the hotel’s lobby. Hoping I wasn’t going to get charged for that, I almost missed his reply. “Oh, that, I ignored it, we both know you’re already disturbed.”

Given I was talking to an invisible gorilla I couldn’t exactly argue with him. So I focused on what he’d clearly come to torment me on. “You can’t seriously think there is something wrong with my outfit, can you? You may be smart when it comes to people interaction but I am not going to take a gorilla’s fashion advice over that of my wife’s.”

Dropping the partially eaten branch Hogarth held both hands defensively. “Even I’m not that dumb. She could dress a chimpanzee up and get him on the cover of GQ.” Which given Hogarth’s opinion of his cousin species, was saying something. “Absolutely nothing wrong with the outfit itself. “, he continued. “I’m just wondering if you wanted this consulting gig to be extended past the initial 90 days?”

I stared at him, in disbelief “What? What has my outfit have to do with my consulting arrangement?”

“The customer is always right, right?”

“So why are you telling the CEO he’s wrong because he’s not wearing a tie?”

The CEO he was referring was my current client. He was a brilliant guy and he made Zuckerberg look like the king of high fashion. I looked back at my reflection and then back at Hogarth. “But what about ‘no judgment’? I’m an agile coach, I’m always promoting ‘no judgment’ in the workplace.”

Hogarth gave an enigmatic shrug,  “well you don’t want to end up like Prince Manfredi, do you?”

“Prince Manfredi?” I blurted while my mind raced to catch up. Renaissance history, really? Manfredi was the young prince of the Italian city of Faenza. One of the many Borgia princes conquered Faenza yet chose not to sack the town and even took Manfredi into his court, well at first. Manfredi would end up arrested and turning up very dead a year later. His crime was being better looking, more charismatic and nicer than the Borgian prince. So he was killed.

How was this relevant? I was about to rail at Hogarth for his complete non-sequitur when my brain caught up with things. Was he really quoting Greene?

When you shout “The Emperor Has No Clothes”, he’s likely to fire you.

Robert Greene wrote the 48 Laws of Power in 1998. It’s reportedly favorite reading of some of the more reviled CEOs in recent history. With laws such as “Pose as a friend, work as a spy” and “Play to people’s fantasies” it’s not exactly high agile reading.

Unfortunately, I’ve found a need to be passing familiar with these laws working as a coach, helping enterprises companies. One of the laws stands out as being unfortunately correct all too often. It is the first law, and it bit me more than once. It says, “Never outshine the master.”

No judgment is a great concept to teach your teams. As an agile coach, I do my best to teach and live by Brene Brown’s advice that “My life is better when I assume that people are doing their best..” Agile teams work best with open communication, honest dialogue and an assumption of positive intent.

The thing is, as a coach, I’m often working in companies that are still deep in the morass of such wonderful advice as “Use absence to increase respect and honor”. This means that while I believe in no judgment and in assuming the best from everyone, the people I’m helping may not be in the same place.

This means, that while I’m trying to help an organization move to more productivity, by enabling healthier teams, I have to always be mindful to how what I am doing is perceived by those I’m trying to help. This is a deeper issue than just how you dress. Whether or not you wear a tie just serves as a good perspective to approach this agile pitfall.

First, you need to understand that I love to wear ties. I enjoy dressing nicely. Polished leather shoes, nice shirts, the whole nine yards. I get a lot of enjoyment from dressing nicely. It’s part of my professional image and I’m proud of it.

And it probably lost me at least one engagement and made others uncomfortable before I realized that “no judgment” is something organizations have to work towards, not be instantly dropped into. In one engagement, the senior coach pulled me aside and told me I was making the sponsor self-conscious. Unlike some sponsors and bosses I’ve had, this sponsor actually dressed fairly nicely. The problem was, I dressed even better (again, all credit does go to my awesome wife, the salmon shirt story is 100% true). I was outshining our sponsor.

In other engagements, I’ve faced the challenge of the “grunge” engineering teams. When the best-dressed person on the team is the guy in blue jeans and a t-shirt with no holes, even wearing a button down shirt and slacks can be a major barrier.

The absolute irony, which I think in part stems from agile practices coming out of software engineering, is I’ve seen coaches show up to a client in shorts, t-shirt and flip-flops, sit in a conference room with a tie-wearing CEO and the CEO doesn’t blink an eye at the casualness. You see, it is far easier to overdress than it is to underdress in agile coaching. A contradiction I’ve been struggling with for years.

What people wear to work, and how they can feel threatened by what you wear, gives us an excellent view into the change challenge. As an agile coach, I’m an expert in dysfunctions. I can spot a half-dozen usually in the first five minutes of the pre-engagement call. Companies hire me to be that expert in dysfunction. They want me to come in and fix them. The same way that they are fine with you wearing whatever you want to the office, as long as it isn’t a suit and tie. While I’m hired to find and fix dysfunction, if I go about it like the child in the “Emperor’s New Clothes” I’m going to find that I’m not all that popular. Just like wearing a tailored shirt and tie can make them uncomfortable, so can pointing out their flaws in brutal honesty.

The worst sin is when you make the people you are trying to help look bad. I worked with one client where they had someone internally working as a coach. This person was a good-hearted person who, unfortunately, had learned agile with a stilted command and control perspective. In less than a month I was able to take two brand new teams and get them to a higher level of engagement and productivity than this coach had done with teams in more than six months. Instead of being thanked, I was shown the door because I undermined the full-time coach’s credibility with his organization.

What this all leads back to is how you engage with your client or employer in those first critical days and weeks. It is all about taking the time to form relationships and create those bonds of trust. The same thoughts I laid down in the AgileConnection article “Building Team Relationships as an Agile Coach.”

Someday I hope people can again wear ties without it being seen as some threat to what other’s wear. Until then, I relish the days I can wear my flashy ties and recognize the days when I can’t.