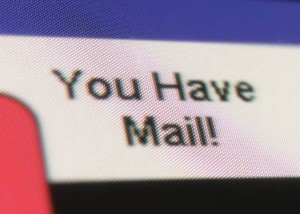 I took a deep breath and plunged in. Wading through the tide I tried to stem the flow and get above the flood. I kept at it, hour after hour, in a relentless slog that seemed to have no end in sight. I tried to stay strong and see my way to the end. But I was weak, I couldn’t do it…

Rearing my head back I yelled into the darkness of my late-night office. “Augh!!….. I hate Email!”

“Then stop,” came a very unhelpful reply from across the room. My cries of anguish had awakened the sleeping Hogarth. My gorilla contemplated me sitting in the solitary glow of my computer monitor.

“Oh, yeah, easy for you to say. How many emails do you get a day, you’re a gorilla.” Two hours of trying to dig myself out of an email hole had not left me feeling like pleasant conversation.

Hogarth tisked at me. Reaching into the darkness he came back with something that I first thought was a large banana. Until he flipped back the case cover to reveal an oblong screen and a soft keyboard. “iBanana. I usually get a couple hundred emails a day.”

I blinked and tried to convince myself I was just dreaming. Until I realized that even in my worst nightmares I would never imagine this much email.Two days in a training class and my inbox looked like an LA rush hour on the Friday on a three-day weekend. How was I going to get through this backlog and on to my current emails?

Oh, right, my gorilla was still there, mocking my working g style. “What do you propose I do, delete it?”

Hogarth lumbered over to my desk, setting his banana-shaped tablet computer on the desk. Leaning into the light he said, “Deleting is certainly an option. If it is really urgent, most folks will follow up with you. You had a very good out of office message.” He probably saw my look of utter horror at these words. “If you have to go through them, then sort it all by subject and use the navigation approach.”

He nodded, “Yep, when you’re lost do you go back to where you started, or do you try and figure out how to get unlost from where you are now. You know, maybe by asking direction or something.”

Trying to ignore the ‘guys never ask for directions’ crack I said, “You figure out where you are now. It would be silly to go back to where you started.”

Hogarth nodded. “Bingo. So why do that with emails? Read the last one in the thread, figure it out from there.”

I gave a resigned shrug, his idea had some merit. It would certainly help with this massive backlog of email. “Okay, so that gets me out of the hole. Got any brilliant ideas on how to not get buried again?”

I snorted, not seeing where this was going. “Oh course I am. ‘For every action there is an equal and opposite reaction”

He nodded his head, black fur shining in the desk lamp’s glow. “Close enough. Now what happens if you apply that to Parkinson’s Law?”

“Parkinson’s Law…” I cocked my head sideways. Desperately, I tried to see where my Gorilla’s logic was taking me. “Parkinson’s Law states ‘Work expands so as to fill the time available for its completion.”

Again Hogarth nodded. “Yes, and so the opposite would be?”

I blinked a few times, processing his question in my mind. “That’s so crazy it just might work…”

RULE YOUR INBOX, DON’T BE RULED BY IT

Parkinson’s Law is the concept that how ever much time you have to complete a task, you will fill that time. So what is the reverse of Parkinson’s Law?

Have you ever been in a situation like this:

Tomorrow you go on vacation. You absolutely have to get this report done, or you can’t go. Normally the report takes two days to compile. You dig in and manage to get it done by the end of the day. You really wanted to go on vacation.

If you’ve experienced something like this, then you’ve discovered the Horstman Corollary to Parkinson’s Law.

“Work contracts to fit into the time we GIVE it.”

I’ve heard of the Mailbox Zero concept many times over the years. I’ve have  even managed to get to there a couple of times, just never for very long. I just never saw how it could be possible. Like so many I believed it was some Sisyphean myth dangled by management consultants to make themselves more money.

For the last several years I was usually happy if I could get under 50 emails and to do even that was a struggle. My email was still killing me. It would backlog with tons of unread messages it felt like I was spending all day in my mailbox, constantly responding to the latest fires. That’s not to say my email habits in the last several years have not improved significantly. I learned a lot of great ideas from the Manager Tools 2005 podcast, Got Email?. Ideas like auto filing distribution list emails into folders,  flagging emails I’m only CC’d on so I know they are lower importance or scheduling my follow up as tasks or appointments. This all had helped, it just wasn’t enough.

Since late March, 2013, I’ve left work with an empty mailbox more than 90% of the time. Not just empty at the end of the day, empty in the morning, and empty after lunch. Following the advice from Manager Tools “Email Three Times a Day podcast” (Email Three Times A Day – Part 1, Email Three Times A Day – Part 2), I stopped letting Parkinson rule my life. I schedule time to read my email, even going so far as to setting a countdown timer. Thirty Minutes in the Morning, 30 minutes in the middle of the day and 15-30 at the end of the day. It wasn’t easy to start. With focus and perseverance though I was able to power through. And all the demons I was worried about never materialized.

Here are some additional tricks I’ve been using. Ones I adjusted from Manager Tools or came up with to meet the my usage of email as a program manager.

“To Follow Up” is where I put an email that requires a response and it will take more than a few seconds to type the response.  I still add a task to my task list. The email goes here so I can later come back and hit reply.

“Waiting” is where I put any email when I need more information to be able to act. This was one of the killers for me in the past. I’d keep emails in my mailbox because I was waiting for more instructions or input. Now I file them in “Waiting” and a couple of times a week I scroll through the folder. Most of the time I have already gotten the response I was waiting for and have acted already. These emails then just get filed or deleted. If I’m still waiting for information, then it goes in one of two buckets. If it is a task I need, I ping them again. If it was something the other party asked me to do, I leave it and wait for them to follow up. Anything older than a few weeks gets filed into a normal file.

What about a massive email backlog? I just got back from vacation and I’ve got a thousand emails! I can’t get through that in 30 minutes.

Nope, you can’t. So don’t. Here are some things you can do.

Email is a tool, we don’t let the hammer decide how we’ll build a house. Don’t let email decide how you will do your job.