“More data, I need more data.” I was staring at my desk, taking in the papers I had 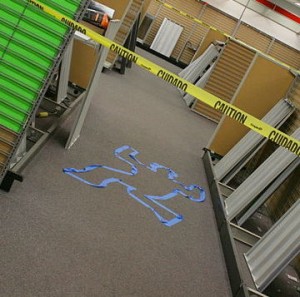 meticulously arranged to fill nearly every bit of open space.  For all it was, I knew it wasn’t enough

And I needed more data. I didn’t want to make any mistakes. I was going to make damn sure my ninety day plan was perfect! What else could I do?

“You could interview the janitor.”

I looked up just in time to see my gorilla sink down beside my brand new fichus tree. Ignoring me, his deep brown eyes contemplated my fichus tree for several moments before a leathery hand reached out to snap a branch free.

“I’m trying to figure out the next step in my ninety day plan, do you mind?”

Hogarth calmly nibbled on the branch, neatly stripping a leaf from the end of the branch. Without looking at me he mumbled. “Hundred and fifty day plan…”

“What?” I turned to look at my wall calendar. My eyes flicked over the months doing the mental math. “How has it already been five months?”

Hogarth shrugged. Pulling a piece of bark out of his teeth he said “Don’t look at me, I’m just the gorilla in the room you’ve been stepping over.”

“It’s advice real estate agents give. When you buy a fixer upper, you make a list of all the things that need to be fixed. And then you fix them.” Hogarth said.

“What does that have to do with the gorilla in the room?”

“Well technically it’s the dead body in the room.”

Hogarth turned his placid eyes towards me. “If you have a dead body on your living room floor, after six months you stop thinking about having to step over it. It’s the same thing with a fixer upper, after six months of dealing with the leaky faucet, you get used to it and it doesn’t get fixed.”

“When was the last time anyone came to you for anything?”

Wait, now that he mentioned  it… Ah man…

YOU BETTER HAVE A PLAN, AFTER THE PLAN

In 2010 I wrote the Ninety Day Gorilla. In that Hogarth and I got to listen as poor Bob (not Bob the Product Manager, this was Bob the other project manager) was let go. What was his crime? His crime had been to try and make changes to fast. He hit the ground running and tried to fix everything as soon as he started. Poor Bob ended up alienating people and getting on the wrong side of the political land mines he didn’t even know were there.

Bob didn’t have a ninety day plan. He didn’t follow the cardinal rule of “Do no harm in your first ninety days.”

Bet you, though, that Bob wouldn’t have ever been accused of being useless. Sure, people hated his guts. But he got stuff done.

There is a follow up rule to the “Do not harm” rule. That rule is “Have a plan for the next ninety days.”

You see, the ninety day rule isn’t a magic bullet by itself. You don’t spend those ninety days sipping coffee and watching the chaos unfold around you. Peter Taylor, the Lazy Project Manager, never advises sitting in the comfy chair during the early part of a project. Those first ninety days are when you gather the information and build the trust you will need to make a difference.

What is important though, is you don’t want to be the dead body everyone steps over. If you haven’t done anything after six months, then no one will ever expect you to do anything.

Get off the floor and get out the door.

One thought on “Do you have a plan for the gorilla on the floor?”