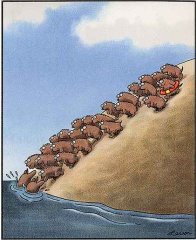 Finally! Just the prep class I’d be looking for. It fit everything I needed, namely a one stop shop that would teach me everything I needed to pass the exam and all that in just six days of intensive training. The certification was as much as mine!

I damn near leapt out of my skin and did leap from my chair. Clutching my chest I whirled about. “Hogarth!” I blurted. I swear, if I ever figure out how an 800 pound gorilla can be so stealthy, I’ll bottle it and make a fortune. “Don’t sneak up on me like that!”

Hogarth shook his head. Lumbering past me he perched on the corner of my desk and pointed at the screen. “No, why are you taking a workshop to be a…” He leaned forward, squinting to read the screen “An IRATE*?”

I stood up a little taller, “That’s an International Registered ACME Technology Evangelist.”

Hogarth looked at me, “And you’re getting one why?”

Hogarth leaned towards my screen, “and it’s worth…” He blinked, putting on a pair of banana shaped spectacles to see better. “It’s worth four figures, four very large figures, to you? Do you even know anything about ACME?”

I shook my head, “Not a thing, but the prep class will teach me everything I need to pass the test.”

“Huh” he said. Levering himself up from my desk, he began to waddle from the room.

“Hey!” I said. “Aren’t you supposed to be saying something profound that makes me realize how big an idiot I’m being?”

Hogarth shrugged. “I suppose, but I need to get going if I want to make my Poo flinging certification prep class. I mean all the monkeys in accounting have theirs.”

“Hogarth, that’s ridiculous. Monkeys throw poo, that doesn’t mean you have to.”

Hogarth turned and looked at me. He smiled and said, “Something profound.”

Whoever remembers their mother saying, “And if all the other kids jumped off a cliff, would you?” Okay, good, for a minute I thought I might be the only one.

As many of you know, I’m studying for PMI’s Agile Certified Practitioner certification (PMI-ACP). I think there is a value to it, or at the very least a value to having strong proponents of Agile as certified members. I go into my own whys on this in the Potato, Pahtato Gorilla.

So, I recently attended a local project management-related Meetup. The subject of this meeting was the PMI-ACP certification. The speakers were from a local training house that currently offers PMP prep course training.

At the end of the meeting more than one person came to me and asked my opinion. At the time I demurred on any full commentary, simply saying that they had definitely figured out their target market. While I absolutely believe in tackling those unspeakable gorillas in the room, sometimes calling them out is just plain rude. So I withheld my commentary at the time. It is also why I’ll withhold any specifics on the meeting or the speakers.

So what did I think of the presentation?

It was a crass commercial that undermined the value and ideals of Agile and PMI certifications.

It completely missed why so many people believe in Agile and have been promoting the use of Agile values and principles in everyday business. Only five of the twenty four slides in the presentation were devoted to Agile itself, with the rest being either wrapper or a pitch on why you should get the ACP and how their upcoming training could prepare you.

To the company’s credit, the gentleman who gave the mini primer on the value of Agile, spoke with the passion of an Agilist. It was clear he believed in and used Agile because it worked, because it made for a better project and a better team.

I wish I could say the same for the other presenter, who provided the arguments on why one should get the PMI-ACP. Let me quote the very first bullet from the “Why the PMI-ACP is important for Project Managers?” slide.

Everything was geared around this concept. That you needed to get the PMI-ACP because it was going to be the next big thing, because everyone was going to be doing it. As a certified PMP I cringed at how they stressed the value of PMI creating the certification. Essentially it boiled down to “They are the industry leader, so it will be taken seriously.” I’ll be the first to say PMI isn’t perfect, but to boil it down to “They are the 800 pound gorilla, that’s why you get their certification” leaves a lot of PMI’s value on the table.

I came away from the meeting feeling like this company cared first and foremost about turning out successful test passers and not practicing Agilists. None of the pitch talked about how it would make us better, how it would help the team, how it would help our businesses. It was all about “me.” Any believer in Agile knows that’s the last thing a project manager should be thinking about. Those of you who have a PMP are probably familiar with the opinions of how the PMP has become devalued by people going through almost factory-like prep courses that are designed to get you past the test, even if you really don’t have a lot of practical PM experience.

·         Is it likely PMI’s ACP certification will become a must have on PM resumes? Strong likelihood.

·         Should every project manager run, not walk, to get certified at their local factory cert shop? Heck no!

·         Are prep classes inherently bad? No, provided they don’t forget the bigger picture.

If I ever develop a PMI-ACP prep course, it will be a course that teaches the value of Agile, not just how to pass the test.

Be the lemming with the life preserver.