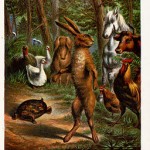 “What do you mean you’re throwing the prototype away?”

Wally nodded, “Yeah, we’re done with it. Time to start on the production design.”

“Are you crazy?” I squeaked. “We’re a month behind schedule and you’re going to start over? Has everyone lost their senses around here?” I pointed at the prototype, sitting on my desk. “You’ve got a working model right there. You take it back to your mad scientist lab and you make that work. Sales set up a big demo with a customer next week.”

I watched Wally sulk out of my office, the prototype clutched in his sweaty hands. “Seriously,” I said to the ceiling, “what part of move fast doesn’t anyone understand? Rework the whole hardware design from scratch? What next, we’re going to rearchitect the database.”

“Probably wouldn’t be a bad idea,” a deep voice said. “It was built seven years ago for a product that didn’t have half the technology we do today.”

“Go away Hogarth,” I said without looking down from my ceiling tiles. Staring at acoustical tile can be so relaxing. Especially when the alternative is to talk to the gorilla in the room.

I could hear him shuffling across the floor (do gorillas generate static electricity when they shuffle?). “Seriously, old Wally has the right idea, you know that?”

I dropped my eyes to give Hogarth a baleful stare. “Right…. And I’ve got some great property to sell you on the moon.”

Hogarth shrugged, “hasn’t been a primate on a space mission since the 70’s. Wally is just trying to build a better product.”

I waved my hand dismissively. “Maybe, but if its late it won’t matter how good it is. He’d be redoing a ton of work if he tossed out the prototype.”

Hogarth nodded, “and by starting over, he could make the unit more efficient, more stable and more reliable. With the prototype he’s got to work around the initial mistakes. Kind of like using suction cups to put a luggage rack on a car instead of having rails built into the car to start with. It will never be the same.”

“Hogarth…” I was getting annoyed with his argument. I had real work to do.

He dropped into the chair across from me, “Or how about house painting?” My total confusion at his non- sequitur gave him a chance to continue. “To do it right, you paint more than one coat. If you try and paint just one, really thick coat, it ends up not working and will start pealing before too long.”

“Why are you hear anyway?” I snapped. “If you’re here to pester me about the prototype, forget it. It works and we just need to tweak it to make it ready to ship.”

“Oh, right,” Hogarth said. He laid a sheaf of papers on my desk. I don’t know where he produced them from and I’m pretty certain I didn’t want to know. “I’ve been writing book and I wanted you to look at it.” He held up a massive hand, “Sorry, it’s in long hand. You ever tried to use a human keyboard with fingers this big?”

Hogarth nodded, “Yep, ‘Conversations With The Gorilla In the Room.“

I took the stack of papers from him and started to look them over. My eyes were instantly assaulted by a riot of writing. The regular paragraph structure was all but invisible underneath a multitude of struck out words, overwritten corrections, whole sentences inserted in the margins, and lines moving words, sentences and even a whole paragraph around the page. I never made it past the first page.

Looking up from the papers I looked across a Hogarth. His face was eagerly looking at me for reaction (note- Gorilla eager looks a lot like “I’m going to eat you”). “Hogarth, this is a mess, I can’t read it.” I held the page in front of him and pointed to the first paragraph. “You’ve got two sentences crossed out and three new ones hand written in. We won’t even go into the grammar issues you’ve introduced into this.”

Hogarth looked at the paper, “Yeah, well I really didn’t want to write it all over again. You can still read it, right?”

I boggled at him for a moment. “Well, yes, I can follow it. But that’s not the point. It’s like you took spit and bailing wire to your writing. It’s haphazard and inconsistent. I’ve bloody got to turn the page sideways to read this added stuff.”

“Rewriting it would have taken too much time though,” protested Hogarth.

“Hogarth,” I slipped into my professor voice. “Rewriting is part of the process. Not only does it make your work better, it makes it easier for others to follow it.”

Hogarth’s eye lit up, “Oh you mean it will work better? Kind of like the carpentry maxim of ‘Measure twice, cut once’?”

All but standing up in my chair, I replied, “Yes, precisely!…” And then I stopped dead. Looking Hogarth straight in the eyes I said “You did it to me again, didn’t you?”

Hogarth pulled a fichus branch from somewhere and began to merrily nibble at it. “Uh huh, I did.”

Hoisted on my own gorilla, again.

“Go slow to go fast.” I’ve heard that motto since I first got into project management.

Agile and Lean development practices recommend the use of rapid prototyping. In essence, build something, see how it works and then build it again, even better the next time. This is more like “Go fast, to go even faster.”

It’s no wonder then, that Big Design Up Front (Waterfall) schools of development rail against this concept. They don’t see this as incremental improvements. In their mindset it is like tossing out the baby with the bath water. You’ve got a perfectly working “product” (software, hardware, lifecycle, whatever), so why start over? This is even more insane than going into existing code and “cleaning it up.” At least with refactoring existing code you aren’t tossing out the original work.

One of traditional project managements all time favorite fables is the “Tortoise and the Hare.” We love to quote this fable. We also love the old maxim of “eight hours of planning will save eight weeks of work.” Even years into my Agile/Lean journey I  have trouble letting go of this fable.

Only this concept isn’t as full proof as I once thought it was. If you spend a year planning without any doing , you’ve got a year farther from being done and a year farther from when you validated (we hope) your requirements with your customer. In his book, The Lean Startup, Eric Ries successfully shows that rapid prototyping can be successful. He demonstrates how doing this can allow you to succeed even when the final product looks nothing like what you started with.

Yes planning is important. Planning though is not the plan. Planning is communication. Planning is making sure everyone is on board and moving in the same direction.  Only planning without doing is like trying to teach dancing by talking over the phone. If you can’t see what you’ve built, you can’t know if your plans are any good.

Like Hogarth and carpenters for centuries have said. “Measure twice, cut once.”

Let me modify that.